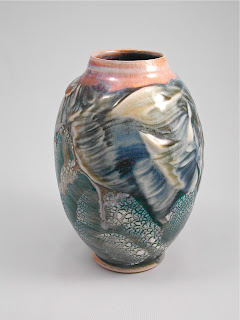 Gordon Hutchens earned his Bachelor of Fine Arts, with Honours, from the University
of Illinois. For 47 years he has been producing exceptional works of art and functional
pottery at his studio on Denman Island, BC. Gordon has recently received the 2019 BC
Achievement Foundation Award of Distinction, “In recognition of extraordinary creative
accomplishment in applied art and design in British Columbia and around the world. His
committed vision, innovative enterprise, and passionate talent are an inspiration to his
community and province.” signed by Premier, John Horgan.
Gordon has had over 25 one man shows and over 100 group exhibitions across
Canada and the US, with major exhibitions in Japan and Korea. His works and articles
have been published in various ceramics magazines and books. He is the author/host of
four educational video productions on Raku and Salt and Soda firing techniques.
Permanent collections include, The Bronfman family’s “Claridge Collection”, the
Canadian Museum of Civilization and the Art Gallery of Greater Victoria.
In addition to his studio production, Gordon has for the last 20 years taught ceramics
courses at North Island College in Courtenay, BC. He has also taught workshops from
Newfoundland to Victoria. His work is known for the depth and diversity of his glazes
and strength and refinement of his forms.
More of Gordon's work can be found here.